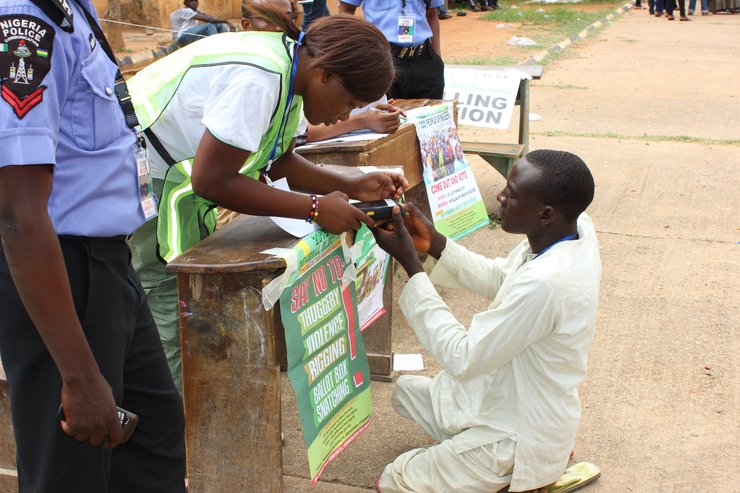 Nigeria’s status as Africa’s most populous nation with the largest economy on the continent has brought an increasing amount of international attention, particularly during its most recent General Elections, which were held on March 28 and April 11, 2015. However, the country’s size and continuing infrastructure challenges also complicate efforts to provide basic rights such as access to voting to some of its most marginalized citizens. The World Report on Disability (2011) estimates that 25 million Nigerians live with a disability.  Approximately 3.6 million of these are believed to have significant hardship in their daily lives. Many of these citizens experience extreme difficulties in exercising their political rights. Further barriers to inclusion in the political process exist for women with disabilities and for persons with disabilities living in rural areas.

The 2015 General Elections were a pivotal moment for democracy in Nigeria. The presidential election was fiercely fought, and saw an incumbent ousted by democratic means for the first time in the country’s history. The stakes in the election were also high, as ongoing violence and discontent in both the North and the South of the country has threatened its stability and led to calls for changes in the style and priorities of the government.

Many of the driving issues in the 2015 elections are particularly important to Nigerians with disabilities, who are often negatively affected by violence and poverty. However, systematic failures to actively include persons with disabilities in the political process have led to widespread disenfranchisement and lack of representation. These failures include physical barriers to participation such as a lack of tactile voter guides, barriers to accessible voting information for people who are deaf or hard-of-hearing, and polling units that are sometimes inaccessible to people with a physical disability. The significant time commitment required to register and vote in Nigeria can also be daunting to citizens, especially as they are often required to wait for extended periods of time in unsheltered areas. The fact that INEC lacks reliable data on the location and needs of people with disabilities makes it even harder to address some challenges to accessibility.

The International Foundation for Electoral Systems (IFES) sought to address some of these gaps by supporting the Independent National Election Commission (INEC) to conduct a number of consultative forums on improving electoral access for persons with disabilities. The forums were held on December 15 and 19, 2014, in six geopolitical zones. Participants included members of the Joint National Association of Persons with Disabilities in Nigeria (JONAPWD) and disabled people’s organizations (DPOs) across the country.

The forums identified a number of obstacles to the inclusion of voters with disabilities, and formulated key action points that will be used by INEC to inform future access and inclusion policies. These include the creation of an INEC Electoral Access working group, development of visual information about polling procedures to meet the needs of people who are deaf or hard of hearing, and the recruitment of persons with disabilities to INEC Desk Officer positions established to work on electoral access issues. The forums also explored the topic of persons with disabilities and electoral violence. Persons with disabilities are often subject to targeted violence, as well as being at a heightened risk of other election related violence. Forum participants called for increased efforts to provide adequate security at polling units.

IFES continued to work closely with INEC on these issues in the run-up to the 2015 elections to assist with implementing some of the lessons learned from the forums. One important outcome of the forums was the formal inclusion of priority voting for persons with disabilities to the official polling procedures. As a result several inserts were added to the election manual for 2015 elections for the first time in the Commission’s history, and poll workers were trained to scan the accreditation and voting queues for voters with disabilities, and to bring those voters to the front of the line for priority access. The updated manual with priority voting procedures was used in the training of over 150,000 poll workers that were deployed for the 2015 elections.

Progress was also made in the development of a data collection form to be used at polling stations to capture data on the sex and disability status of voters at the polls. This initiative represents the first large-scale effort to capture demographic information of voters at the polls, and originated from concerns raised by the zonal consultative forums on the lack of a proper database of persons with disabilities registered to vote, which posed a huge challenge for election planning. The form will help capture information on disability type and gender. It is expected to go a long way to help INEC’s internal planning for subsequent elections, particularly with regards to voter education and access for Nigerians with disabilities.

IFES plans to further assist INEC in its efforts to increase accessibility during the post-election period. One example of this is through the development of an internal policy on the inclusion of persons with disabilities. This policy would aim to mainstream issues that might affect voters with disabilities into INEC’s internal activities and external engagement with stakeholders. Some steps towards mainstreaming inclusion issues are currently taking place through discussions being held between INEC and various DPOs on the creation of an electoral access working group.  The access group would regularly interface with the commission and advocate on issues related to the rights of persons with disabilities.