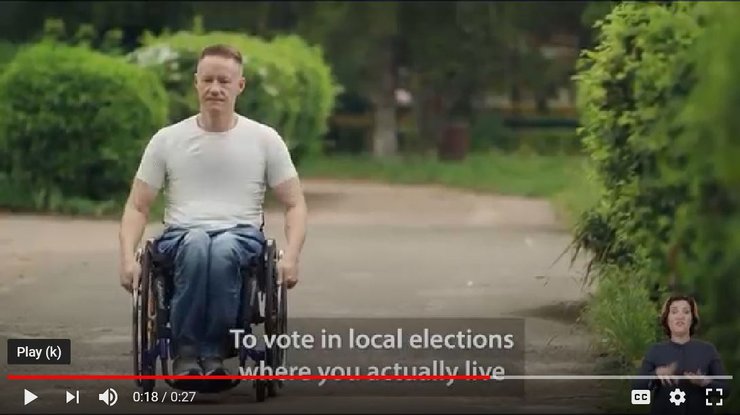 In July 2020, Ukraine’s Group of Influence, with support from the International Foundation for Electoral System (IFES), United States Agency for International Development (USAID), Global Affairs Canada (GAC) and the United Kingdom Department for International Development (DFID), produced videos to inform internally displaced persons (IDPs) about new voting procedures ahead of the 2020 local elections. The video describes the new legal procedures, which allow internally displaced persons, migrants and other Ukrainian citizens without registration to vote in their new communities. This video includes sign language interpretation and mainstreams disability by including images of persons with disabilities alongside other citizens. A transcript in English of the video is available below.

Svitlana Pasichnyk, manager: But unfortunately, before now I could not vote at my place of residence.

Natalia Bravistova, pediatrician: I am not registered here.

Oleksandr Fomenko, producer: I can now vote in a place other than where my official residence is.

Female narrator: To vote in local elections where you actually live, change your electoral address between July 1 to September 10. More details available at www.drv.gov.ua.