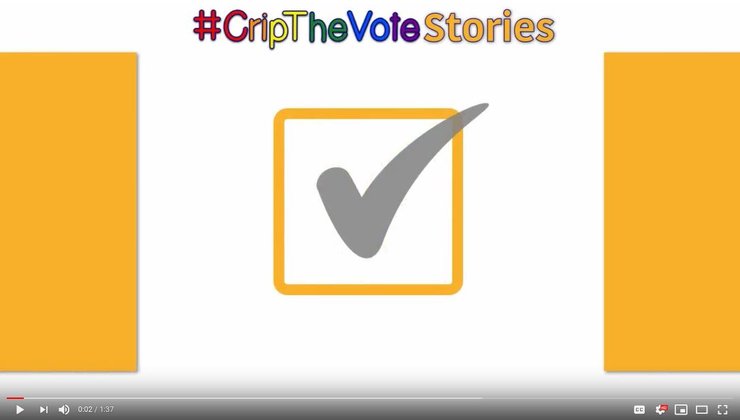 In 2016, Rooted in Rights, a network of digital storytellers that produces videos and social media campaigns on disability rights issues, partnered with the organizers of #CripTheVote, a nonpartisan campaign to engage voters and politicians in discussion about disability issues in the United States, to create a series of short videos featuring the disability community discussing the importance of voting. The videos include captions as well as written visual descriptions. Web links to each of the videos and transcripts are available below.

“I first was old enough to vote in a presidential year in 2012. That meant the world to me. You know, for years before becoming a college student I had been involved in local politics just by nature of my disability advocacy and and I’ve always enjoyed meeting with political leaders, local leaders too, and talking about what it was I experienced as a disabled person and one thing that I always heard was bring your experiences to the poll, help inform our priorities by voting. I’m a big believer in the mantra of Justin Dart which is, “Vote as if your life depends on it because it does,” You know, I think as disabled voters and as disabled people, in general, we’re told your opinions don’t matter you’re powerless, but one of the ways, we can exert our power is by showing up to the polls and voting for issues that we believe in and engaging with politics on whatever level we’re able, and feel comfortable. Local elections especially are really really important in terms of helping your city be a better place. You know what issues matter to you so go out there and make your voice heard and known that on all levels it matters, and I hope to see you #CripTheVote this fall.”

“I think it’s really really really important especially when you’re disabled, or you’re from a demographic who is grossly underrepresented in the media, that you get out there whatever way you can and become politically involved because when you do this, you’re not only fighting for your rights and for the rights of others. you’re not only supporting the community, but you’re also creating representation, especially if your life is intersectional because then you’re not only creating representation, you’re creating the diversity within the representation which is also super important. Keep in mind, the election is just about choosing a president and vice president, I mean, there’s council members, there’s your mayor, there’s all these super local elections where your vote really does count because you’re gonna pick who’s in charge your town, who’s in charge of your neighborhood, who’s gonna make policies who’s gonna get this, who’s gonna get that so you know, keep in mind that even if you’re disillusioned with the presidential election, don’t forget about the power of your local vote.”

“Growing up, I was influenced by my grandmother who was a Great Depression baby, and grew up during Jim Crow era. She grew up during a time where African-Americans did not have the rights that we have today, and voting was one of those rights that we had to fight for. Hearing her stories about growing up in the rural South and her seeing the changes of America really struck me as to how our rights are not to be taken for granted, particularly when it comes to voting. The ability to vote is something that we as disabled people have to take full charge of. We are the largest minority group in this country representing over 57 million voices, opinions, and we can become a very powerful voting bloc this election season and from here on. For those who are still trying to figure out exactly who they want to vote for, that’s perfectly fine. Take your time. Being an educated voter is so important. Ask questions. Watch debates. Have discussions. Join Twitter chat that are online, to really hear other opinions and to help you gather what’s important to you. I know, for me, as a black, disabled woman, not voting is not a option This election season, please, please #CripTheVote. Your voice matters. Our voices matter and our lives matter when it comes to the political decisions that are to be made on our behalf by those we elect in office.”

“Before the Help America Vote Act (HAVA), when I voted, I had to have a friend mark my ballot for me, or poll officials. By the time I had one Democrat, one Republican, one guide dog, and me in the polling booth, it didn’t feel like a secret ballot. Although, I’m sure they all kept their mouths shut. The first time I used the accessible voting machine, put on the headphones, listened to the choices, pushed buttons to pick my choices, and voted by myself, I cried. I was an American with a secret ballot, at last! I’m active on various city, county, state, and national committees and boards, because I care about the issues and think the voices of people with disabilities need to be heard too. Please vote, because you can, and because you care about the issues and candidates. As a friend and lobbyist says: “If you’re not at the table, you’re likely to be on the menu!””

“In addition to seeing voting as my civic duty, I also think that voting goes hand in hand with the disability community’s mantra of “nothing about us without us.” So, I love to get educated about the issues and weigh in on them at the ballot box. My favorite voting experience was a couple of years ago when I volunteered at the polls. It was a man with Down syndrome, first year voting, and he came with his parents. And, um, you know, I helped him get checked into the polling book, and on the way back he showed me his sticker. I gave him a thumbs up, and his dad stopped by afterwards, and said that the gentleman had commented to him that he thought it was great to see someone like him at the polling place, that he felt so much more comfortable casting his vote and felt like he belonged. Indeed, I think all Americans belong at the polling place, and I hope to see you there on November 8.”

“Voting matter for everyone, and if you’re disabled, voting is the first step to shaping the government that shapes our lives. As disabled people, government policy isn’t abstract to us. We feel it in the things we experience every day. If your insurance won’t replace that trashed, half-broken wheelchair, that’s a healthcare policy issue. If your kid needs an interpreter at school, that’s a policy issue too. If you’re scared that you or a member of your community is gonna suffer violence because your local police force isn’t trained to recognize and de-escalate situations with disabled people, that’s a policy issue, and it deserves to be acknowledged and addressed. We have to get more disabled people into policy making positions and into government so that our community takes charge of the laws that affect us. We’ve got to bring nothing about us without us into all branches of the federal government. And just as importantly, we’ve got to bring it to the state and local government positions, because they directly impact our access to housing, employment, transportation, and education, so #CripTheVote. #CripTheVote on election day and #CripTheVote a year from now at your local city council meeting. #CripTheVote with phone calls and letters to your congressional representatives, and #CripTheVote with your state rep. #CripTheVote at the school board. #CripTheVote with your county elections office. If we get out and vote, we show politicians that their election and re-election rides on taking us seriously and making our issues a priority.”