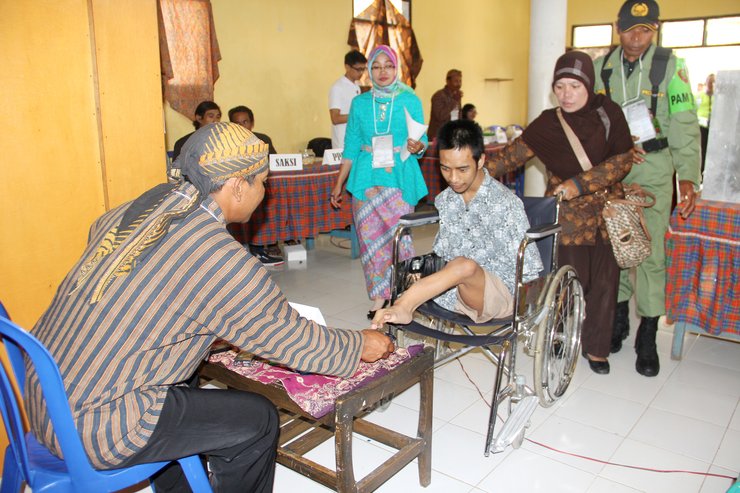 The photograph for first runner-up, "Participation of Physical Disability Using His Left Foot on Regional Head Election" by Alfi Yusron of Derap Desa (March 2017) is pictured above. The article below was selected as the first runner-up for the News reporting category. Winning and runner-up submissions can be viewed here.

This article originally apperaed in in Tempo.co.

TEMPO.CO, Banda Aceh – An hour after the polling stations opened, Ifwan Saha departed to the polling station where he was registered, chaperoned by his family. Whisking his wheelchair forward, he proceeded to the registration table at Polling Station 6, Gampong Lambheu, Darul Imarah Sub-District, Aceh Besar, 15 February 2017.

After punching his ballot to indicate his vote, Ifwan whisked his wheelchair towards the ballot boxes. That is where he wasn’t able to access the box. He asked a staff to help put his ballot into the box. “The box was located at a height I wasn’t able to reach – around one meter in height,” he said to Tempo.

Ifwan, also the Head of the Aceh Chapter of Indonesia’s Persons with Disabilities Association (PPDI), received reports from his friends across Aceh. These reports indicate that many polling stations were not readily accessible, for example, having to be accessed through a set of steps, or having the ballot boxes put in a table way too tall to reach independently by wheelchair users.

Far before the election day, the Aceh Election Independent Commission (KIP Aceh) had provided adequate information dissemination and education about persons with disabilities, also involving the Aceh Chapter of PPDI. They have collected the data of voters with disabilities throughout Aceh. “Unfortunately, the executors at the field are not ready yet or are not aware enough to implement disability-friendly measures properly. I hope for better in upcoming elections,” he said.

Syarifuddin, a person with visual disabilities, also conveyed a similar concern. He casted his vote at Polling Station 3 Neuseu Aceh. “The braille template for gubernatorial election was provided at the voting booth, but there is no template for the mayoral election,” he said.

Syarifuddin asked this to the polling station staff, which proceeded to tell him that the Braille template for mayoral election was not available. Syarifuddin did not make a big fuss out of this because he brought along with him a companion to help him vote.

Aceh KIP mentioned that they kept the needs of persons with disabilities on top of their mind.

According to Aceh Besar KIP Commissioner Junaidi, or often called as Ngoh Di, the polling station staff in all Aceh villages have been instructed to build accessible polling stations, “For example, must be in an open yard but not covered by thick grass.”

Regarding ballot boxes that are too high that wheelchair users like Ifwan weren’t able to reach, said Junaidi, shouldn’t be a problem. “The polling station staff members are ready to put the ballot box lower should the voter prefer to put in their vote into the box by themselves.”

Junaidi also added that the KIP has the complete data about all persons with disabilities spread across polling stations in Aceh Besar.

In Aceh Regional Head Elections, Aceh KIP has a comprehensive data regarding voters with disabilities. National Human Rights Commission (Komnas HAM) Commissioner Otto Nur Abdullah mentioned this as a positive development in the conduct of regional head elections in Aceh. “During the presidential election, there are no data about persons with disabilities. This election, the data is available,” he said in a press conference at Aceh KIP Media Center, 16 February 2017.

Aceh KIP Chairman Ridwan Hadi stated that his institution often released specific instruction about accommodating disability needs close to the election date. He instructed that all Regency/City KIP, PPK, and PPS to properly supervise and ensure that polling stations are disability-friendly. “We need to make sure that all polling stations are accessible,” he stated.

One of those information dissemination efforts was, ten days prior to election day, Aceh KIP visited Health Efforts Foundation for the Disabled (Bina Upaya Kesehatan Para Cacat). Nova Sarah (18), a student with vision impairment, stated, “After going through the simulation held by Aceh KIP, now I know how to cast my vote properly.”

There were 3,431,582 voters in the 2017 Regional Head Elections in Aceh, casting their votes in 9,592 polling stations across Aceh, including penitentiaries. Polling stations were spread in 23 regencies/cities over 6,477 villages across Aceh.

According to Ridwan, this election went without any security concerns. “At the moment, the recapitulation process is held at the sub-district level,” he said.

Although already feeling comfortable in this regional head election’s voting process, Ifwan and Syarifuddin hopes for further improvement in elections to come so that they can participate in elections fully independently.