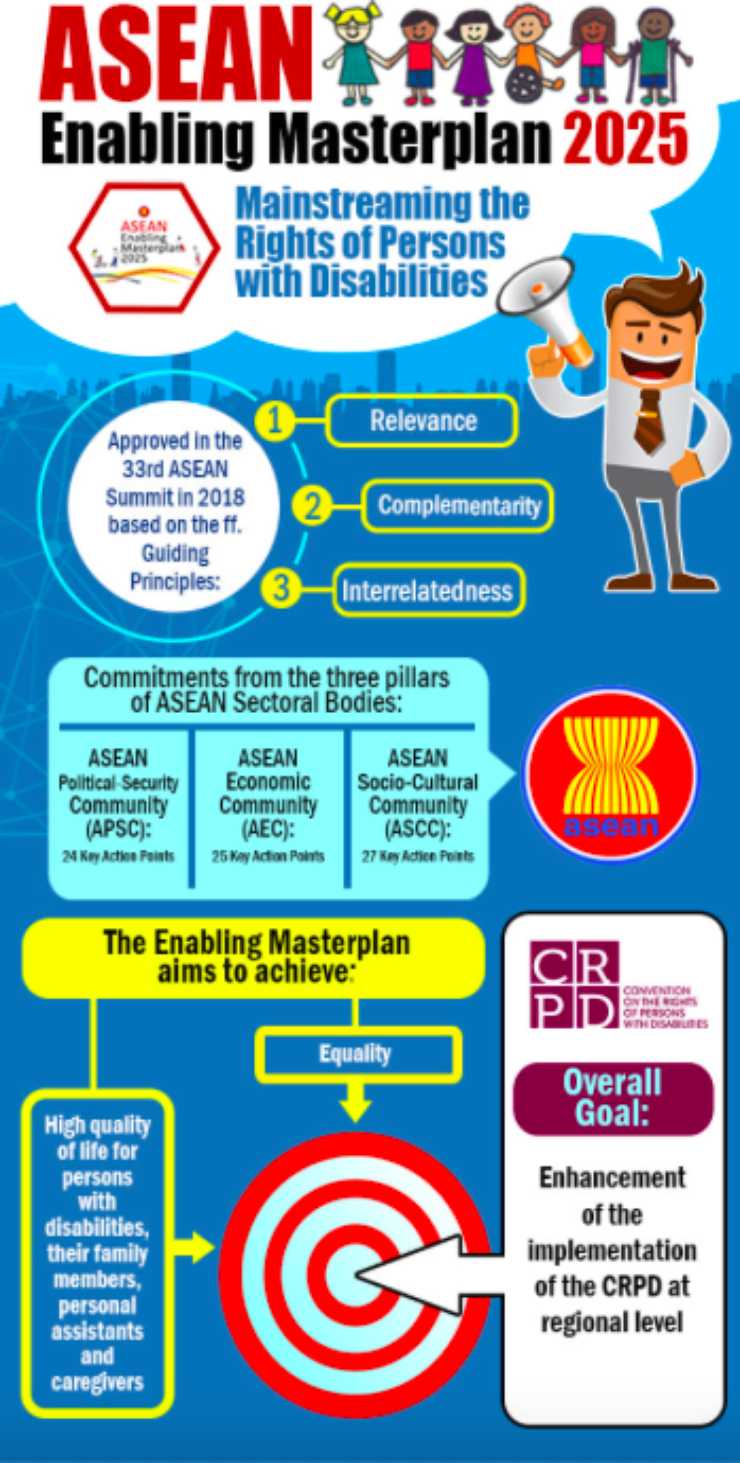 According to the World Health Organization, of the one billion people with disabilities, it is estimated that 90 million live in Southeast Asia alone. Recognizing the unique experiences and challenges that people with disabilities have in Southeast Asia, the Association of Southeast Asian Nations (ASEAN) ASEAN Enabling Masterplan 2025: Mainstreaming the Rights of Persons with Disabilities was adopted by the member states at the 33rd ASEAN summit in 2018. The plan aims to mainstream disability rights in ASEAN policy and development. To learn more about the Enabling Masterplan, click here.

In August 2021, the CALL Foundation for the Blind in the Philippines, a member of the General Election Network for Disability Access (AGENDA), held two contests with the support of the International Foundation for Electoral Systems (IFES) and the United States Government. The first contest recognized an infographic designed by Angelica  Banton. Her graphic highlights the guiding principles and the commitments to the Enabling Masterplans of the three pillars of the ASEAN Sectoral Bodies. The article by Erica Potian that won the second contest explains how the Enabling Masterplan impacts policies, providing people with disabilities tangible solutions to real and existent problems. The article, “Towards a Barrier-Free ASEAN Region,” details the ASEAN mission to address and dismantle the barriers that exist for people with disabilities. The full article is attached.

Alt Text for the infographic from the artist:

"The title of the Infographic was show by a clip-art image of a man holding a megaphone and a though bubble clip-art saying "ASEAN Enabling Masterplan 2025: Mainstreaming the Rights of Persons with Disabilities". The ASEAN Enabling Masterplan was also beside the text on the left side part. Below it was a solid white circle with a blue text inside saying that "It was approved in the 33rd ASEAN Summit in 2018 based on the Three Guiding Principles: 1. Relevance, 2. Complementarity and 3. Interrelatedness. Under it were the text: "The commitments from the three pillars of ASEAN Sectoral Bodies, and they were: ASEAN Sectoral Bodies, and they were: ASEAN Political-Security Community (APSC): 24 Key Action Points, ASEAN Economic Community (AEC): 25Key Action Points, and ASEAN Socio-Cultural Community (ASCC): 27Key Action Points."

All of these commitments were point to in the ASEAN Logo on the middle-right part of the infographic.
Below it was a caption that reads: "The Enabling Masterplan aims to achieve: Equality and High quality of life for persons with disabilities, their family members, personal assistants and caregivers." These two objectives were pointed on a "Target" clip-art at the bottom-center part.

Lastly, on the bottom-left corner of the infographic was another thought bubble. Inside it was the Logo of the Convention on the Rights of Persons with Disabilities. Below the logo is the text that says: "Overall Goal: enhancement of implementation of the CRPD at the regional level", and this thought bubble is also pointed on a "Target" clip-art at the bottom-center part. "